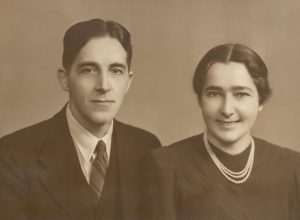 Raymond Golsworthy ( 22 Nov. 1911 – 7 May 2006) describes himself as a ‘greatly privileged servant of the Lord Jesus Christ’. Clearly converted at an early age, he sensed immediately that he was to spend his life spreading the gospel somewhere overseas. His first interset was the Eskimos and he began learning the Eskimo language! Later on, it switched to the Tuaregs of the Sahara.

After training at the ‘Missionary Training Colony’ in London, he was led into fellowship with the church at Honor Oak, and was greatly enriched through the ministry of Mr. T. Austin-Sparks and the other leaders there.

He finally went to India in 1937, and he and his colleague Fred Flack were quickly brought into touch with brother Bakht Singh, and invited to share with him in his great evangelistic and  church-planting work.

He married Joyce White (7 April 2013 – 7 April 2005) in India in 1941 and almost immediately they were captured at sea and spent three and a half years in a POW camp in Japan, an experience for which they never ceased to praise God. All this led on, later, to a close working-relationship with the colleagues of brother Watchman Nee, in different parts of the Far East, something which again proved very enriching. ‘CRG’ and his Joyce have been completely one in heart from the beginning, and shared the same ‘Vision’.

They are now both in the presence of their heavenly Bridegroom and will continue  to be an example of faith to many.